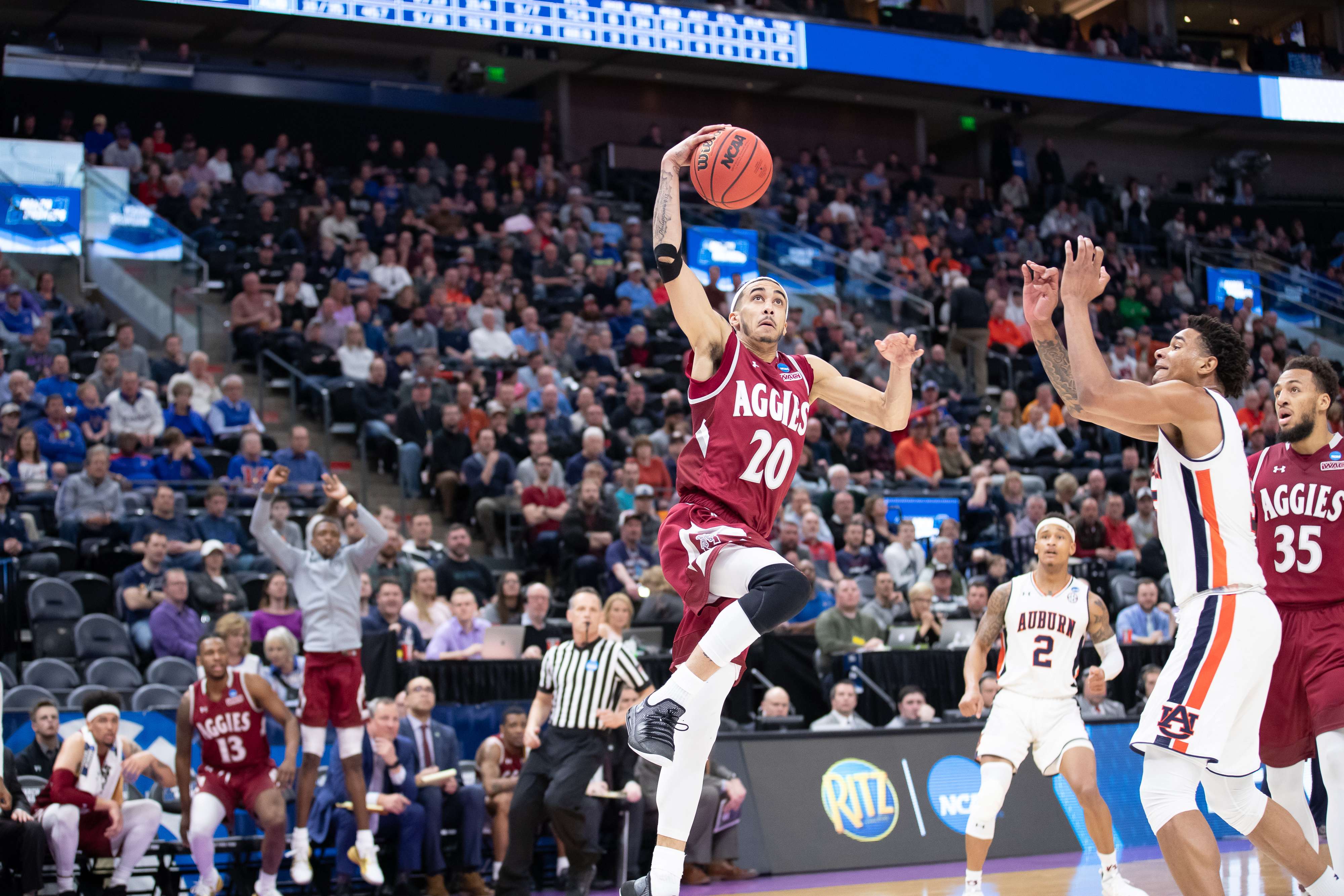 Prior to WAC media day on Oct. 9, I made a list of five candidates for WAC Player of the Year. The list had the WAC Newcomer of the Year and WAC Tournament MVP on it. On the list were two First-Team, All-WAC performers, a second-team selection and a member of the All-Defensive team. At the time it was a solid list.

But, we know that games are not played on paper. In fact, at the time, I was missing a big name who will be a part of this write-up. If I didn’t include him, Seattle head coach Jim Hayford might ring my neck.

Let’s take a look at each of the five candidates I previously mentioned. And, add an additional name to the bunch.

Queen is one of two Aggies to start every game for head coach Chris Jans. The 6-6 senior leads the Aggies in scoring at 14.8 points per game. That total is good for sixth in the WAC. Queen is shooting 46 percent from the field and 38 percent from 3-point range. The best news is that Queen and the Aggies have won six straight games. And New Mexico State sits atop the WAC standings. Along with big man Ivan Aurrecoechea, Queen has been the most consistent Aggie in 2019-20. The reigning WAC Tournament MVP picked up right where he left off and as the Aggies continue to win, perhaps Queen will separate himself a little more in this race.

Acquaah is second in the WAC in scoring at 18.5 points per game. The issue here is that Acquaah isn’t as efficient from the field as perhaps he would like.

Acquaah is shooting 37 percent from the field and averages 16 shot attempts per game. That number is second to Seattle’s Terrell Brown who attempts 18 shots per game. However, Acquaah gets to the line more frequently than all but one player in the WAC. And he is efficient from the line, shooting 85 percent from the charity stripe. Consider the fact that Acquaah plays 33 minutes per game, that is a solid number. Did I mention that CBU is 12-5 overall and 3-1 in WAC play? And the Lancers are coming off back-to-back conference road wins? Acquaah also averages 6.1 assists and 5.4 rebounds per game.

At 6-10 overall, it hasn’t been quite the season UTRGV was planning on in 2019-20. However, Javon Levi continues to play his game. Levi leads the WAC in assists at 8.3 assists per game. Levi also leads the WAC in steals at 2.5 per game. The senior guard also averages 10.8 points per game while shooting 42 percent from the field. That average would be more if Levi was a bit more efficient at the free throw line where he shots 68 percent. Levi has 27 assists through three conference games and is second in assist to turnover ratio. It’s a big reason why UTRGV is 2-1 in conference play. Levi’s 30 steals is good for second in the nation. If UTRGV continues to win, keep Levi’s name in mind.

At the end of the 2018-19 season, Carlos Johnson was one of the best players in the WAC. Mark Pope and Utah Valley can tell you all about Johnson, who torched the Wolverines for 35 points in the WAC Semifinals. And Johnson has been pretty consistent in 2019-20 for Dan Majerle and the Lopes. Johnson is averaging 14.4 points, 5.4 rebounds and 1.7 assists. The senior guard is shooting about 40 percent from the floor and 33 percent from the free throw line. The problem for Johnson is the struggle GCU has had all season. It’s hard to award Player of the Year honors to a member of a squad with a losing record. There is still a lot of basketball to play but Johnson has fallen a little behind in the race.

Just remember this: I am just going over my preseason list of potential WAC Player of the Year candidates. And, coming into 2019-20, Terrell Brown was high on the list. Brown was a First-Team All-WAC selection in 2018-19. The senior transfer averaged 16.3 points per game and made 2.1 3-pointers per game in 2018-19. However, 2019-20 hasn’t gone quite as planned. Brown struggled with a groin injury early on and struggled to find his shot. Kansas City can tell you they might think differently. Brown has a season-high 18 points on 7-11 shooting including three 3-pointers in Saturday’s win against the Roos. Since WAC play began, Brown is averaging 12.3 points per game and has hit two or more 3-pointers in every game. Add in that the Aggies are in first place in the WAC standings and Brown might have some say along with his teammate Trevelin Queen at the end of the season.

Terrell Brown – Seattle – Leads the WAC in scoring at 19.6 points per game. The potential WAC Player of the Year candidate averages 6.7 rebounds and 4.8 assists per game. Shoots 41.4 percent from the field and gets to the free throw line often. Brown is a triple-double waiting to happen almost every night.

Seattle guard Terrell Brown is a leading candidate for WAC Player of the Year as he stuffs the stat sheet night in and night out. Courtesy Seattle University Athletics.

Brandon Boyd – California Baptist – Since WAC play began, Boyd is averaging 18.8 points per game and is shooting 40 percent from the field. Boyd is a big reason CBU is 3-1 in WAC play thus far. And his spin cycle was the WAC Sports Play of the Week.

Jordan Jackson – UTRGV – Jackson has been extremely efficient all season. And he has gotten better since WAC play began. Jackson is shooting 50 percent from the floor and 44 percent from 3-point land. Since WAC play began, Jackson has put on a show. His dunk against Kansas City was the Dunk of the Night on Sportscenter and Jackson had another highlight reel dunk against Chicago State. Did I mention the Vaqueros are 2-1 in WAC play?

De’Monte Buckingham – CSU Bakersfield – This may be a surprise name to keep an eye on. But, since WAC play began, the Richmond transfer is leading the WAC in scoring at 24 points per game. Buckingham is shooting 53 percent from the field and 44 percent from 3-point land in WAC play. All of that while playing nearly 35 minutes per game.