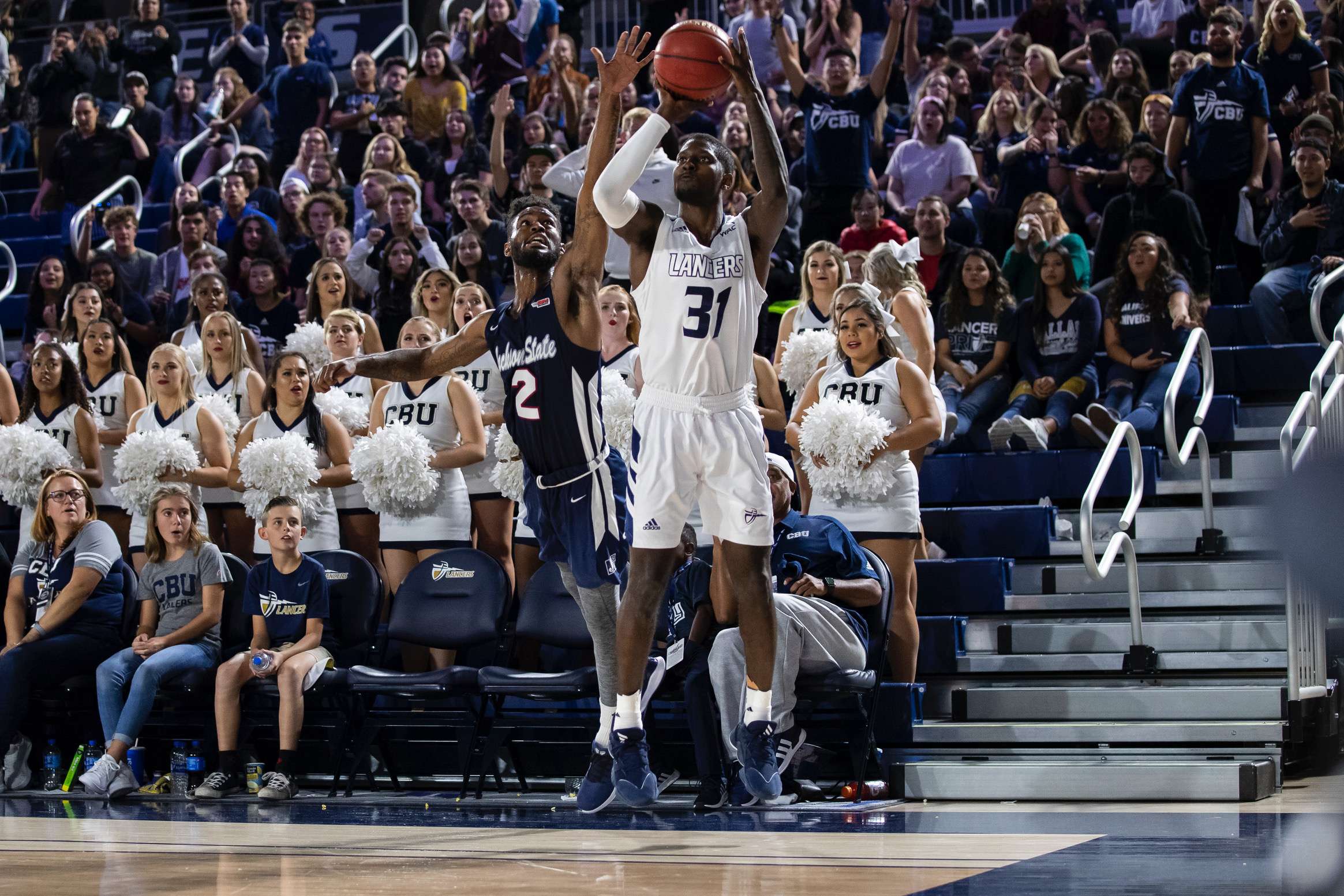 People will argue that teams in the WAC took it easy when scheduling their season opener. This is true. Six of nine teams took the floor against non-Division I opponents. And eight of nine teams opened their season at home. The lone WAC school to go on the road was UTRGV who traveled to South Dakota to take on South Dakota State.

Everything went nearly as expected. Sorry, Grand Canyon. In your season opener, you didn’t hold up your end of the bargain. We will talk about that in just a moment.

All seven teams that won on opening night did so by no less than 17 points. Utah Valley’s win over Westminster was the lone win not by 20-plus points. Two WAC schools broke the century mark and one probably could have but took it easy down the stretch.

Let’s take a look at each team’s opening night.

Remember that WAC Hoops Digest told everyone that Chicago State is going to be 3-0 to start the season. This is no joke. Led by Xavier Johnson’s 35 points, Chicago State put it on Judson College, 103-60. Yes, Judson is an NAIA opponent, but Cougars needed to get off to a good start in 2019-20. And Tuesday night was exactly that. Plus, it is perhaps a statement win for Lance Irvin and Chicago State.

Three other Cougars were in double figures along with Johnson. Andrew Lewis chipped in 15 points, Kalil Whitehead had 12 points and Solomon Hunt had 11 points. Chicago State shot 56.2 percent from the field and hit nine 3-pointers in the win.

With a revamped roster full of junior college transfers, it’s good to see Chicago State get off on the right foot.

Opening the season on the high plains of South Dakota is not an easy task. South Dakota State is coming off a 24-9 season in which the Jackrabbits lost to eventual NIT champion Texas in the first round.

That didn’t matter to Lew Hill and his Vaqueros.

Remember what was said on the WAC Hoops Digest Podcast? UTRGV likes to full court press and create chaos. Over the final four minutes of the second half, that is exactly what happened. Preseason All-WAC guard Javon Levi scored on three straight layups. Leslie Varner hit a layup followed by a Levi jumper. Rob McClain got in on the mix with another layup and UTRGV cut the deficit to five. When all was said and done, UTRGV trailed by just three at the break.

To say the second half didn’t go well is an understatement. UTRGV shot just 19.44 percent from the field and were 2-6 from beyond the arc. Perhaps the biggest stat for the Vaqueros is having four assists on 21 made baskets. The defense was efficient with five steals and five blocks. But the shooting woes to start the season were evident.

Mark Madsen Gets the First Win of His Career

When Utah Valley got off to a slow offensive start on Tuesday night, it was shades of their exhibition win over College of Idaho on Friday night.

The lid was on the basket and UVU couldn’t hit a 3-pointer to save its life. In fact, it took nearly 17 minutes for UVU to hits its first 3-pointer. Ege Havsa threw up a prayer from the cheap seats that found the bottom of the net. Over the next few possessions, Casdon Jardine and Isaiah White hit 3-pointers and UVU got things rolling. The Wolverines cruised to a 72-55 win over Westminster and gave new head coach Mark Madsen the first win of his head coaching career.

In a new era under the former Los Angeles Laker assistant coach and player, UVU used a 14-2 run midway through the first half to take the lead they never relinquished. Isaiah White was the catalyst in giving Madsen his first win, with a 25-point, 13-rebound double double. UVU guard Brandon Averette finally got in the flow as he scored all 16 of his points in the second half to go along with five rebounds and four assists.

One of the biggest takeaways and Madsen pointed this out post game, were the 10 combined blocks from Brandon Morley and Emmanuel Olojakpoke. Both had five blocks in the contest.

Another WAC team with a new head coach and the same result. Junior guard Brandon McKissic made sure his new head coach Billy Donlon would get his first win in Kansas City. McKissic finished with a game-high 27 points on 10-15 shooting and four other ‘Roos scored in double figures in a 102-49 win over Avila.

Avila actually led 16-15 with 13:20 to play in the first half. However, Kansas City used a 9-0 run over the next three minutes to take control of the contest. Another 12-2 run toward the end of the first half gave Kansas City an 18-point lead and the ‘Roos rolled to the big win.

Kansas City shot 52.8 percent in the win, dominated the boards and hit 12 3-pointers. Perhaps the two big stats to look at are that Kansas City had 30 assists on 38 made baskets and the ‘Roos also forced 28 turnovers. With Donlon’s preference for defense, you know the new man in charge in Kansas City has to be happy with that stat.

Crazy things have to happen if an upset is going to take place. And on Tuesday night in Phoenix at GCU Arena, that’s exactly what happened. Division II Davenport Panthers hit 15 3-pointers, including 10 in the second half to beat GCU, 82-73 in the season opener for the ‘Lopes.

Carlos Johnson finished with a team-high 22 points and 1 rebounds in an embarrassing season-opening loss to Davenport on Tuesday night. Courtesy GCU Athletics.

Let’s put in perspective how horrible this is the GCU. Davenport lost by 50 points on Saturday to another Division II opponent. 50 points.

That is how bad of a loss this is for GCU. Yes, when a team gets red hot from downtown, there isn’t a ton you can do. Problem is, GCU was just 2-19 from beyond the arc compared to shooting 60.4 percent from inside the 3-point line. Add in that GCU was 15-19 from the charity stripe and this should have been a GCU win going away.

However, that wasn’t the case at all. Davenport had 37 bench points, out-rebounded the ‘Lopes and held a 16-point lead early in the second half. In fact, Davenport led from start to finish in this contest. GCU guard Carlos Johnson hit two free throws to tie the game at two and then it was all Davenport.

Perhaps the ‘Lopes were looking ahead to Illinois on Saturday. Or, perhaps WAC Hoops Digest and all media were completely wrong about the ‘Lopes. Either way, this was a terrible loss for GCU and for the WAC as a whole.

New Mexico State head coach Chris Jans said guard Jabari Rice had a really nice offseason. And Rice showed the world what his coach was excited about on Tuesday night in the season opener for the Aggies. The sophomore guard scored a game-high 21 points as New Mexico State opened with a dominating 92-46 win over Western New Mexico. This game was over in the first five minutes as the Aggies jumped out to a quick 16-0 lead. And for reference, New Mexico State led 52-16 at halftime.

Four other Aggies along with Rice finished in double figures. Trevelin Queen had 14 points in just 22 minutes. Redshirt freshman William McNair had 11 points while Ivan Aurrecoechea and newcomer Shawn Williams both finished with 10 points.

It is a good start heading into Tuesday’s rivalry game with UTEP.

Seattle head coach Jim Hayford has a very experienced group at his disposal. And on Tuesday night, in the Redhawks season opener, the world got a taste of that experience. Terrell Brown finished with a team-high 16 points, four other Seattle players were in double figures and the Redhawks nearly broke the century mark in a 98-64 win over Pacific Lutheran.

Perhaps the big absence from the stat sheet is senior guard Morgan Means. Might be an injury or some other issue but, even without their senior leader, the Redhawks cruised.

11 Redhawks played eight or more minutes. 8 of the 11 players who saw the floor played more than 15 minutes. So, it was a good opportunity to get even more experience for a team that is going to be dangerous this season. Seattle shot 56.7 percent from the field although the Redhawks were just 8-28 from beyond the arc.

Taze Moore and Shawn Stith each finished with a game-high 18 points and CSU Bakersfield hit the century mark in a 103-51 win over Notre Dame de Namur on Tuesday night at the Icardo Center in the season opener for the Roadrunners.

Yes, it is the season opener and there is a lot of basketball to play. But, if anyone had any question whether or not California Baptist is more than just Milan Acquaah, that question was answered Tuesday night.

Fairfield transfer Ferron Flavors Jr. finished with a game-high 22 points. Idaho State transfer Brandon Boyd chipped in 16 points and Ty Rowell chipped in 13 points. Acquaah and De’Jon Davis both finished with 11 points. Perhaps the more impressive stat is that Acquaah also had seven assists and six rebounds in the contest.

Either way you look at it, CBU opened the season with a 93-70 win over an NCAA Division I opponent. The Lancers were one of two teams in the WAC to open their season against a DI opponent and it was a success. The Lancers outscored Jackson State by 17 in the second half and two big reasons why were that the  Lancers hit 9 3-pointers and were 18-20 from the free throw line.