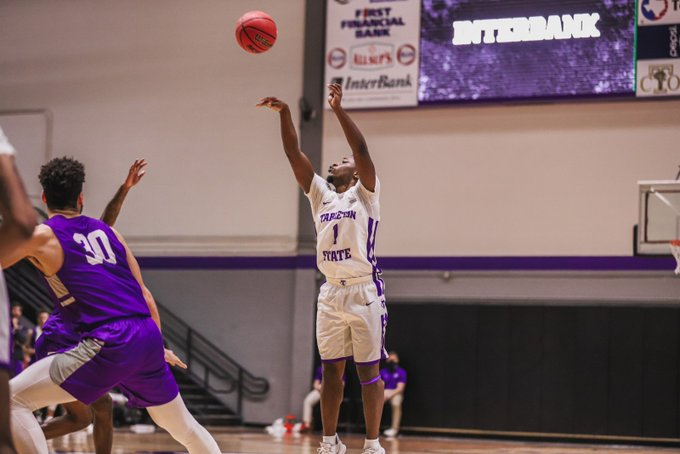 The opening night of WAC play was a fun one. Simple as that. GCU was fortunate to escape Wisdom Gym with a win. Tarleton State’s Tre Gipson put on a shooting clinic late in a near-upset. Ejections happened in the Utah Valley-California Baptist game.

It was just the kind of night you expect on opening night of conference play.

Assistant coaches were ejected. A trainer and strength and conditioning coach as well. But, it didn’t stop Utah Valley taking advantage of California Baptist’s rust. The Lancers haven’t played a game since Dec. 12. And the rust was on full display Friday night in the UCCU Center.

Jamison Overton led the way for Utah Valley with a game-high 18 points and some highlight reel dunks.

What was more impressive was the defensive effort of the Wolverines. California Baptist scores 90 points per game and shoots nearly 40 percent from the 3-point line. On Friday night, Utah Valley held the Lancers to a season-low 50 points and just 22 percent from deep.

Ty Rowell and Reed Nottage combine for nearly 34 points per game. Well, despite missing their starting guard and another key defender in Jordan Brinson and Jaden McClanahan, Utah Valley held Rowell and Nottage in check all night. Rowell finished with 7 points on 3-9 shooting while Nottage finished with just 2 points.

In a crazy moment early in the second half, there were six ejections. Utah Valley big man Fardaq Aimaq who had 12 points and 14 rebounds was ejected for fighting.

To go along with this, Utah Valley assistants Todd Okeson and Jarred Jackson, trainer Andrew Nelson and strength coach Matthew Flores were all ejected. California Baptist’s Elijah Thomas was ejected as well. Here is a short video of what happened.

Here is a short look at what happened. pic.twitter.com/pvR0gNH8tZ

Utah Valley shot 47 percent from the field and had 21 assists on 29 made baskets. It is the first win over a DI opponent for the Wolverines in 2020-21.

Both teams take the floor in the UCCU Center again on Saturday night. Tip is at 6 p.m. MT on the WAC Digital Network.

It was a thriller in Stephenville, Texas as Grand Canyon outlasted the upset minded Tarleton State Texans. It came down to the final buzzer, and it was Montre’ Gipson who took the final shot that would’ve tied the game at 75 all. Gipson had a career night in the loss. The Ranger College transfer posted a new career high of 30 points; additionally, he recorded three steals and four assists.

The Texans never said die. With just under 90 seconds to go, Mikey Dixon finished a fastbreak layup to put Grand Canyon up 69-62. Tarleton responded, going on a very quick 10-7 run that had the Grand Canyon lead within three. Montre’ Gipson headlined the final run, posting eight of those ten points. Gipson’s three that would’ve tied the game at the buzzer bounced off the back of the rim.

Tre Gipson from ANOTHER ZIP CODE! It's a one-possession game in the final seconds‼️#TARvsGCU x @TarletonMBB pic.twitter.com/pccCdIWcKm

Leading GCU tonight was Wichita State transfer Asbjørn Midtgaard. Midtgaard led the Lopes with 19 points and nine rebounds. The hero for GCU though was redshirt sophomore Gabe McGlothan. Coming off the bench, he had 14 points and posted the teams best number in the +/- with a solid +10. He was a big performer tonight for first year coach Bryce Drew, especially since Alessandro Lever and Jovan Blacksher Jr. struggled.

This is now a Gabe McGlothan fan account pic.twitter.com/YvitPfMtEJ

We shouldn’t be so surprised that Tarleton State hung with GCU. They gave Texas A&M all the Aggies could handle back on December 2. There is still a ways to go and lots of basketball to be played, but it’s possible that Tarleton State may prove to be better than we all thought.

Game two of this series will take place Saturday night at 6 p.m. MT at Wisdom Gym. If it is anything like tonight’s game was, it will be a good one.