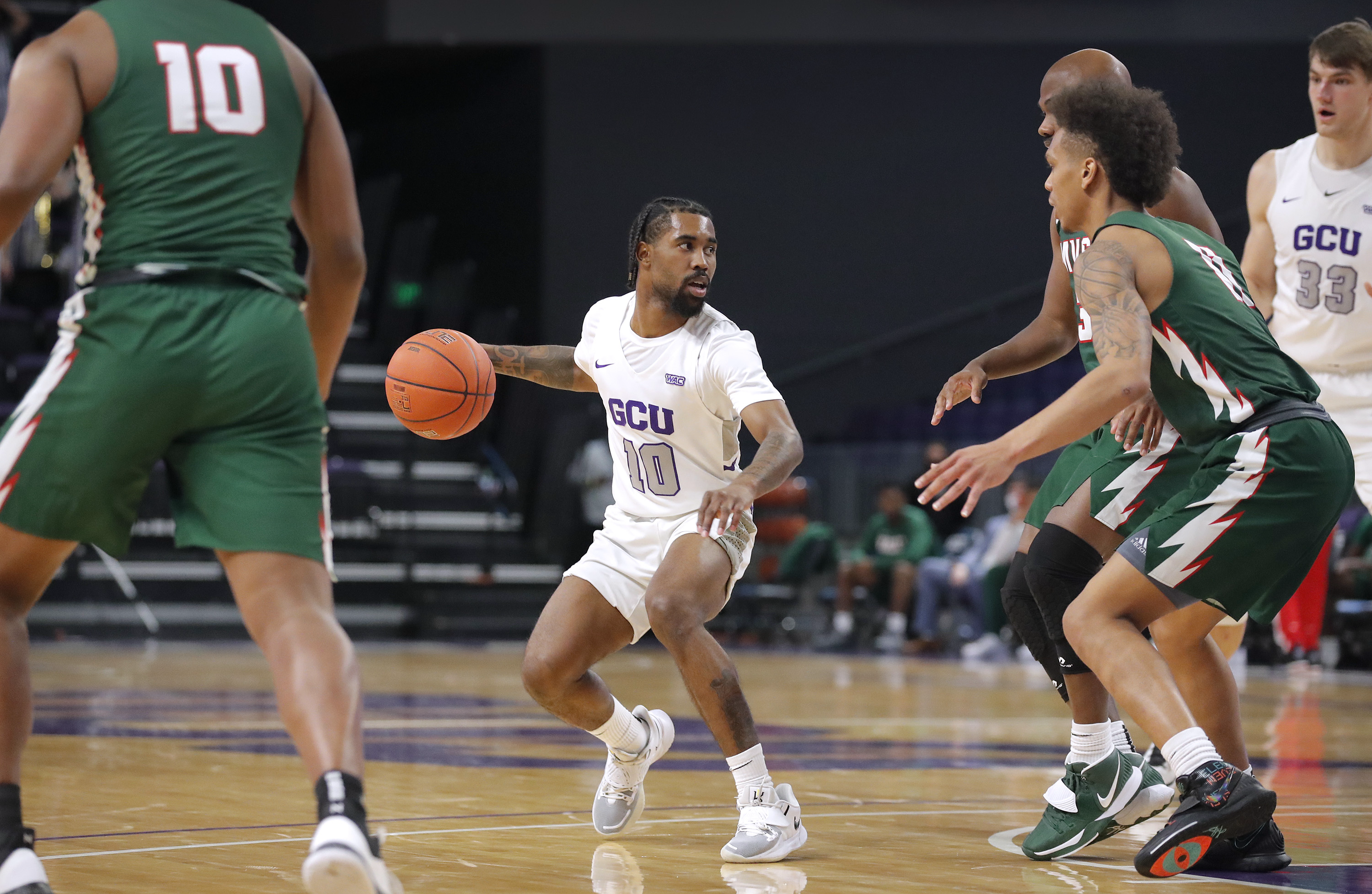 Jovan Blacksher Jr. and GCU showed they are for real with a win over Nevada and a nail-biter loss against Arizona State this past week. Courtesy GCU Athletics.
Share
Tweet
Share
Share
Email
Comments

It is time for the first WAC Power Rankings of the 2020-21 season. And yes, I will probably get a lot of grief from New Mexico State fans, but that’s alright. Like it was stated last season, these power rankings can change from week to week. And I base these power rankings on much more than ‘potential’ or previous years. Wins matter. Opponents matter. And when it comes down to it, the power rankings are about who is playing the best at a specific time.

These power rankings are in no way a prediction of how the season will go down. They don’t represent the WAC standings. All they represent is what I see at the current time happening in WAC Hoops.

With that being said, let’s get to the first power rankings of the season.

It’s pretty simple. The Lopes have the best non-conference win and took nationally ranked Arizona State to the brink on Sunday afternoon. GCU is 4-1 under first-year head coach Bryce Drew. And the culture is changing in Phoenix. Instead of focusing solely on having one player put up big numbers, it’s more of a team effort to start the 2020-21 season. Jovan Blacksher Jr., at the current time, is a legit candidate for WAC Player of the Year. Big men Alessandro Lever and Asbjørn Midtgaard are playing at a very high level.

Perhaps the biggest reason GCU was able to beat Nevada and hang with Arizona State is the Lopes got significant contributions from other players. Against Nevada, it was Mikey Dixon and Oscar Frayer who finished with 11 and 12 points, respectively. Dixon had another solid night against Arizona state, finishing with eight points in 25-plus minutes on the floor.

GCU has shown it is for real early in this 2020-21 season. Question is: will it continue? The Lopes have another shot to solidify this ranking when they take on San Francisco and Colorado in Las Vegas on Dec. 20 and Dec. 22.

UTRGV is perhaps the most experienced team in the WAC. Head coach Lew Hill returns 12 players from the 2019-20 season. Only 10 played last season but Marek Nelson and Ricky ‘Doc’ Nelson both redshirted so they understand what Hill is trying to do. What’s even more impressive is that UTRGV is 4-2 without Stony Brook transfer Jeff Otchere even taking the floor yet. Sean Rhea has been really good. Javon Levi continues to do his thing although he has missed the past two games dealing with a foot injury.

And prior to GCU beating Nevada, UTRGV had the best non-conference win, 81-64, over UTSA. The Roadrunners were ranked 140 in the KenPom rankings before getting blown out by the Vaqueros.

What is even more amazing is we haven’t seen Dason Youngblood play quite as well as he is capable of. Hunter Schofield is still getting into basketball shape after dealing with a preseason injury. And Jarod Greene has shown flashes of brilliance.

It’s too bad that Tuesday night’s game at Utah State was cancelled. Jon Judkins’ return to his Alma Mater would have told us a lot more about the Trailblazers.

Not many teams will go on a two-week road trip to open a college basketball season. Jim Hayford took his Redhawks on exactly that. Seattle got off to a really good start with a win over West Coast Conference foe Portland. Seattle followed up the season-opening win with wins over William Jessup and Air Force before falling to CSU Northridge in Las Vegas.

After starting the season 3-0, the Redhawks then lost four straight before getting back on track with a win over non-DI opponent Northwest on Sunday.

Darrion Trammell has been a surprise. The City College of San Francisco transfer is second on the team in scoring at 17.1 points while averaging 4.1 rebounds. Riley Grigsby has taken over the leadership role and is averaging 17.8 points and 4.4 rebounds. No other Redhawk is averaging in double figures. Freshman Kobe Williamson and City College of San Francisco transfer Emeka Udenyi have had solid games at times. And Aaron Nettles has been efficient.

Seattle needs someone else like Jared Pearre or Daron Henson to step up and give Grigsby and Trammell some help.

So, the only reason that California Baptist is this low on these initial power rankings is due to the fact the Lancers only have one win over a Division I team. Had CBU swept SE Louisiana, CBU would be sitting at No. 4 rather than No. 5. Yes, CBU got off to a roaring start, nearly knocking off USC in the season-opener. But then, for whatever weird reason, the Lancers let SE Louisiana hang around in game one fo a two-game set and the Lions pulled off the upset.

What makes that loss even more baffling is the whooping the Lancers put on the Lions two nights later.

Ty Rowell, Reed Nottage, and Gorjok Gak have been red hot to start the 2020-21 season. Tre Armstrong had a career-high 27 points in the win over SE Louisiana. And as a team, CBU is shooting 39 percent from beyond the arc.

The Lancers have a big test on Wednesday at Arizona. And CBU plays a common opponent in Long Beach State on Saturday at the CBU Events Center. CBU will move up in these rankings as the season goes along. There is no doubt in my mind about that.

Somehow, Utah Valley needs to figure out how to close games. In a pair of games this past week against Southern Utah and Wyoming, the Wolverines battled but didn’t finish. Against BYU on Nov. 28, Utah Valley got out to an early first half lead but then offensive lulls put a damper on any kind of upset.

Fardaws Aimaq has been huge for the Wolverines. The Mercer transfer who sat out last season is averaging 17.2 points and 15.6 rebounds. Aimaq just set a new record for rebounds in a game when he pulled down 20 boards against Wyoming.

Trey Woodbury, Jamison Overton and Jordan Brinson have been really good for Utah Valley. And Georgia Tech transfer Evan Cole finally took the floor for the Wolverines this week.

Finishing games, playing at full strength, and communicating much better on defense are keys for the Wolverines moving forward.

Yes, the Aggies are extremely low in these power rankings. And don’t worry angry Aggie fans. This will hopefully change once the team comes off the Covid-19 pause and plays some more games. The Aggies had to move operations to Phoenix in order to practice and play. Yes, New Mexico State is 2-0 with wins over non-DI opponents Arizona Christian and Benedictine. The Aggies were supposed to play Santa Clara, Cal Poly and Arizona but all were cancelled due to a positive Covid-19 test within the Aggies’ program.

Add on top of all this that preseason WAC Player of the Year Jabari Rice is out for 6-8 weeks with a foot injury, and things are a real mess for the defending WAC champions. Once New Mexico State is able to get back on the floor and play some games, the Aggies will move up in the rankings.

How is this for scheduling? Tarleton State was supposed to play No. 1, No. 5 and No. 2 in the nation. But, Covid-19 strikes again as all three games were cancelled. Perhaps this is because Gonzaga, Kansas and Baylor all saw the battle the Texans gave Texas A&M on Dec. 2. Okay, that is a conspiracy theory so forgive me.

Billy Gillispie has a good group of guys that I think are much better than many give them credit for. The Texans are 2-2 with both wins coming against non-DI opponents while both losses came against DI teams including potential new WAC member Abilene Christian. Montre’ Gipson and Tahj Small both average in double figures for the Texans. And 10 players average 10-plus minutes per game. We won’t know much more about Tarleton State until Dec. 23 when the Texans travel to Pepperdine. All other opponents are non-DI opponents.

Lance Irvin opted out of coaching prior to the 2020-21 season tipping off. Chicago State hasn’t had a full roster at all this season. And despite glimpses of potential, the losses keep mounting. The Cougars are losing by an average of 36 points per game. And yes, let’s be real, not many teams play the difficulty of schedule that Chicago State does. The Cougars don’t have a non-DI opponent on their schedule. And here is the even better news for Chicago State. Not one game has been cancelled for the Cougars this season.