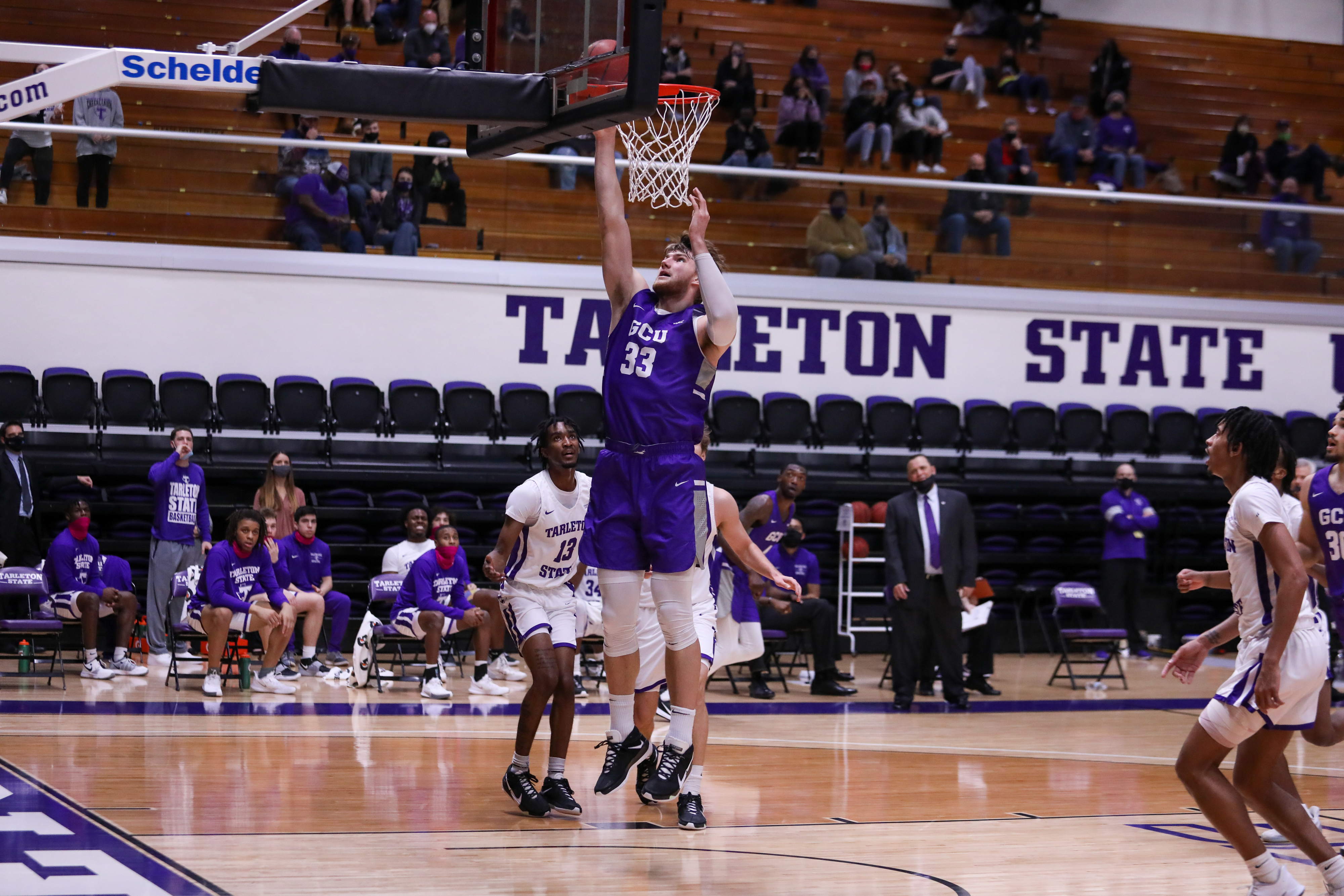 The power rankings are back. It feels like it’s been forever since the power rankings have been put out. Let’s just blame COVID-19 for that. Cancellations, postponements, and teams opting out have made it nearly impossible to put these rankings out on a weekly basis.

But, conference play has begun, and more games were played in two days than have been played in the past two weeks. UTRGV and Seattle fans might not agree with us on these power rankings. But, conference wins take precedence over wins against non-DI opponents. I think we can all agree on that.

Asbjørn Midtgaard won WAC Player of the Week honors after averaging 18.5 points and 10.0 rebounds in a conference-opening sweep at Tarleton State. The Lopes had a battle on their hands at Wisdom Gym in Stephenville. On Friday night, the Lopes won 75-72. On Saturday night, GCU won 59-48 and held the Texans to just 19 second-half points.

And in the middle of it, Midtgaard used his size advantage to the fullest. GCU won the rebounding battle in both games, shot nearly 45 percent from the field in both games, and showed they are deeper than Jovan Blacksher Jr. and Alessandro Lever.

Gabe McGlothan had his best game in a GCU uniform on Thursday. McGlothan had 14 points and 7 rebounds and was a key component in holding off the Texans. On Saturday, Oscar Frayer was the hero, hitting four 3-pointers, one of which came with 5:29 to play and GCU trailing 44-43.

GCU is deep and has talent. The biggest question surrounding this program is if that will equate to a championship or not? Under Dan Majerle, it never did. Perhaps under first-year head coach Bryce Drew it will.

The only reason Utah Valley is second in these rankings is because GCU won on the road. Otherwise, Utah Valley had the more impressive conference-opening wins. Had it not been for an ejection early in the second half, UVU big man Fardaws Aimaq would have pulled down 20 rebounds. Instead, Aimaq finished with 12 points and 14 rebounds in just 19 minutes.

Jamison Overton continues to put on a show for the Wolverines. On Friday night, Overton had a game-high 18 points to go along with eight rebounds. And Overton followed that up with 15 points on Saturday in an 81-77 win over CBU to earn the series sweep.

What Utah Valley has is perhaps the best duo of big men in the WAC. If you think I am biased, just watch the Wolverines in the second half of Saturday night’s win over CBU. Aimaq and Evan Cole accounted for 29 of Utah Valley’s 51 second-half points. Cole showed he has range as he hit back-to-back 3-pointers in the second half. And Aimaq continued his tear on the boards, pulling down 16. Both Cole and Aimaq finished with double-doubles and its the first time since 2017 that Utah Valley has had two players record double-doubles in the same game.

A trip to the Pacific Northwest might give us a better idea of this Utah Valley team. But there was an edge in the UCCU Center over the weekend and UVU made a pretty big statement.

UTRGV didn’t play any conferences games this past weekend as Chicago State suspended its 2020-21 season. Yes, the Vaqueros took care of business against St. Mary’s University with a 96-67 win. And a big reason they are at 3 in these rankings is because Stony Brook transfer Jeff Otchere finally took the floor for the Vaqueros. And in just 12 minutes, the former American East Defensive Player of the Year made his presence felt. Otchere had 7 points, 4 blocks and 5 rebounds.

Otchere, along with Sean Rhea, gives UTRGV more depth in the paint and a true rim protector. And once UTRGV gets floor general Javon Levi back from injury, the Vaqueros will be extremely dangerous.

Rhea continues to play at a high level. Marek Nelson is a stretch-4 with great athleticism. And LaQuan Butler has been red-hot recently.

UTRGV hosts Dixie State this weekend and don’t be surprised if the Vaqueros sweep the weekend.

Remember, these rankings take into account conference wins over non-DI wins. But that doesn’t downplay what Seattle has been able to do in 2020-21 season. The Redhawks have played 12 games, sit at 7-5, swept WCC foe Portland, hung with Pac-12 foe California. And have been fortunate to not have any shutdowns.

City College of San Francisco transfer Darrion Trammell is a WAC Player of the Year candidate along with teammate Riley Grigsby. Trammell and Grigsby are the only Redhawks averaging double figures at 17.5 and 18.6 points per game, respectively. The Redhawks shoot nearly 44 percent from the field and average 72.5 points per game.

The major concern for the Redhawks is who will step up if Grigsby or Trammell struggle? Emeka Udenyi has shown glimpses of being that guy at times. Jared Pearre had a monster game against Portland on Dec. 30 but only scored 5 points against non-DI opponent Saint Martin’s on Jan. 9.

That will be something to keep an eye on as Seattle opens WAC play this weekend by hosting Utah Valley.

I am trying to be as unbiased in these rankings as I can be.

Jamison Overton and Utah Valley made a statement with a conference-opening sweep over CBU this past weekend. Courtesy UVU Athletics.

And despite losing both games to GCU on this opening weekend of conference play, Tarleton State deserves some respect. Montre Gipson had a career-high 30 points and nearly helped the Texans pull off the upset on Friday night. And then on Saturday night, the Texans defense stifled GCU for nearly 37 minutes before GCU pulled away in the final minutes.

Billy Gillispie is a great coach. There is no denying that. If the Texans can get consistency on offense, this team will be dangerous. Johnathan Jackson had a team-high 14 points on Saturday. But Tarleton State shot just 30 percent from the field and only scored 19 second-half points. That won’t win many games. The other issue facing the Texans is a lack of big men. On Friday and Saturday that was apparent as GCU big man Asbjørn Midtgaard had his way down low.

Tarleton State will get better. But the schedule doesn’t get much easier with a road trip to CBU this weekend.

The only reason CBU is this low on these rankings is because it got blown out on Friday night at Utah Valley. Simply put, the Lancers just didn’t play well on Friday night. Leading scorer Reed Nottage fouled out with 19 minutes left and CBU never found its rhythm.

Saturday night, CBU played a near perfect game. Let me explain. The Lancers got dominated in the paint on Friday night. So, the game plan was to pack the paint and make Utah Valley hit the outside shot. It worked. The Lancers pulled even at the break and jumped out to a 37-30 lead to start the second half.

Unfortunately, the lid came open for the Wolverines and despite keeping the game close, CBU couldn’t finish off what was a much better performance on Saturday night. Perhaps that had to do with point guard Ty Rowell fouling out with a little over five minutes remaining.

Either way, CBU has to shoot it better especially considering that is what they really rely on. And, staying out of foul trouble is key. This team is dangerous when it gets in rhythm and playing at home with their head coach returning to the sidelines will be a recipe for success this weekend against Tarleton State.

There is not much to write about in these rankings pertaining to the last three. Dixie State was off this weekend due to a positive COVID test within the New Mexico State program. The Trailblazers head to South Texas to open WAC play at UTRGV. Frank Staine should be back and he is going to have to have a big weekend in order for the Trailblazers to pull off an upset and get their first WAC win.

It’s safe to say that New Mexico State will climb in these rankings once they can get back on the floor. It has just been a mess of a season for the defending champs. Following a loss at CSU Northridge on Dec. 28, and cancelled games against Santa Clara and UC Riverside, the Aggies went on pause again prior to their conference opener at Dixie State.

There is frustration, concern for the mental health of the players and staff and you can feel it anytime you listen to head coach Chris Jans in his weekly press conferences. There really isn’t much more to say except that we hope NMSU gets cleared and can take the floor again soon.