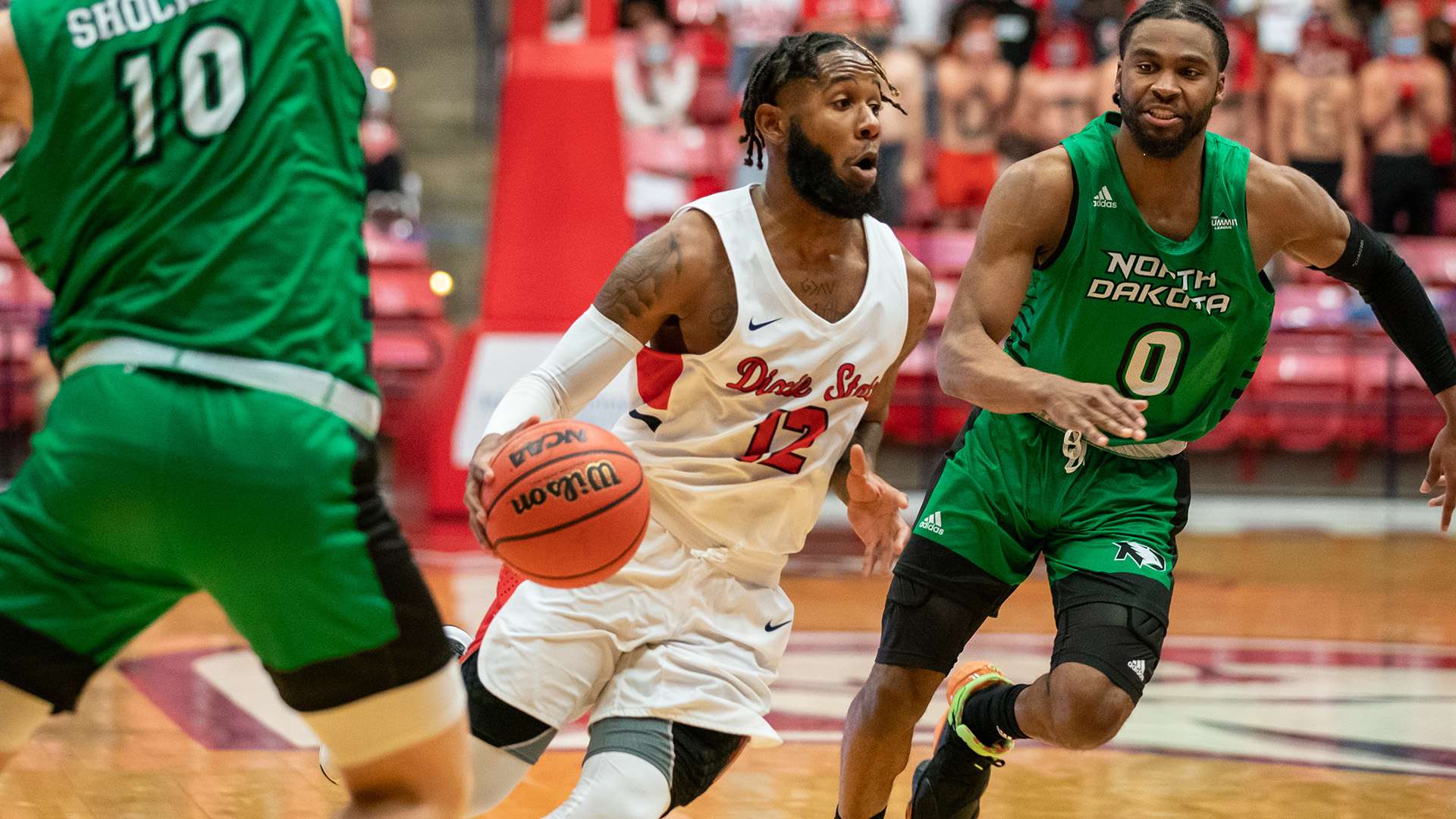 Dixie State point guard Cameron Gooden was having a career day on Saturday with a team-leading 20 points. Gooden capped his career day with what some might refer to as the dagger late in regulation.

The junior guard knocked down a key 3-pointer that gave Dixie State a 67-63 lead with 1:11 to play over Denver. And it was a lead the Trailblazers never gave back to the host Pioneers.

Gooden, Jacob Nicolds and Frank Staine all hit key shots and key free throws down the stretch and Dixie State earned its first road win of the Division I era, 73-70 over Denver.

“Cameron [Gooden] played really good,” Dixie State head coach Jon Judkins noted. “The one three he hit [with 1:11 remaining] to put us up four was a big one for us. He’s getting used to playing and getting more comfortable, and that was a big difference today.”

Dixie State came out on fire on Saturday. Frank Staine and Hunter Schofield each hit 3-pointers to race out to a 16-7 lead early on. Dixie State, led by Gooden, finished off the first half on a 10-4 run to take a 40-36 lead into the break.

“I was really happy with the way we started,” Judkins said. “We always say ‘let’s go out and throw the first punch’ and we did that, we came out and won the first four-plus minutes.”

“[Denver] kind of went on a run there after that and we let them back into the game. But I thought the way started and the way we competed was really good.”

Dixie State continued its barrage to start the second half. The Trailblazers went on a 10-2 run to push the lead to 10 with 11:16 to play. And Gooden hit a pair of free throws with 9:35 to play that pushed the lead to 12 before Denver came storming back.

Led by Robert Jones and Jase Townsend, Denver went on an 11-0 run to cut the deficit to one with 6:31 to play. Dixie State big man Hunter Schofield finally ended the run with a jumper to make it 60-57 and a few minutes later, Gooden hit the dagger.

“[Hamilton Gym] was a tough place to play, especially with it being a quiet gym [no fans in attendance], and it being our first road game,” said Judkins. “But our guys handled it and figured out a way to win in the end. It was a good first road win for us and to get a win there was huge.”

Gooden had a game-high 23 points. Hunter Schofield and Frank Staine were also in double figures with 14 and 10 points, respectively.

Next up is potentially a trip to Logan to take on Utah State on Tuesday night. However, the Aggies have been dealing with some Covid-19 issues so the game is still in jeopardy.

Dixie State One of Three Undefeated Teams in the WAC

In its first year at the Division I era, Dixie State is off to a perfect 3-0 start. The Trailblazers are one of three WAC schools to have multiple wins against Division I opponents. And along with Grand Canyon and New Mexico State, Dixie State is undefeated. The Trailblazers beat North Dakota in their season-opener and, picked up their first road win on Saturday at Denver.

The Trailblazers have four players averaging double figures led by Cameron Gooden at 13.0 points per game. Jacob Nicolds (12.7), Frank Staine (11.7) and Hunter Schofield (10.3) are all having a solid start to the 2020-21 season. And, Dixie State has had a different leading scorer in all three contests thus far.

If Tuesday night’s game goes on, WAC Hoops fans will learn a lot more about the Dixie State Trailblazers. For now, Dixie State has shown the world it deserves some respect in its transition to the Division I level.