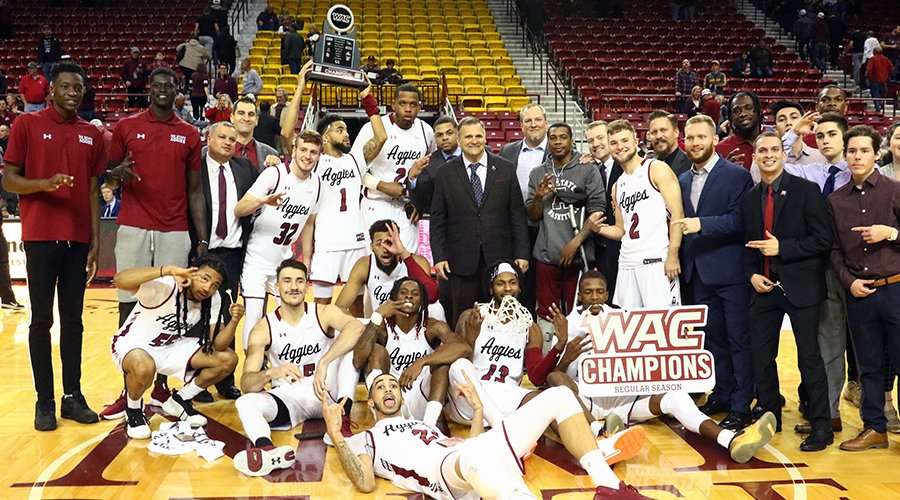 Election night was an anxious time for Americans. The uncertainty of the future and what it holds is on the minds of everyone. What some didn’t expect in the middle of the election chaos was for college basketball stats guru Ken Pomeroy to drop his initial 2020-21 rankings. And, what these initial KenPom rankings show is that the WAC is really behind the eight-ball.

However, in 2019-20, things came crashing back to Earth. Only two teams had 20-plus wins. And only three teams finished with a winning record: New Mexico State, California Baptist and Kansas City. Here is the worst part of the 2019-20 season: eight teams were in the sub-200 range. And the WAC only have nine schools. To give you somewhat of a perspective, Chicago State was ranked 353…out of 353 teams.

Yes, adding two new schools to the conference who are in their first year at the Division I level doesn’t help. This is evident by the fact that KenPom has both Tarleton State and Dixie State in the sub-300 range.

But, the lack of non-conference wins is perhaps the main issue. New Mexico State is the only school in the WAC that wins consistently in non-conference play.

Utah Valley has had chances to upset Kentucky in recent years. California Baptist had a big win at UC Irvine in 2019-20. But, for the most part, WAC schools fall well short in non-conference play. And perhaps that is why the WAC is so low in the first KenPom rankings of the year.

In 2020-21, there are opportunities for some non-conference wins. And KenPom loves non-conference wins. But, WAC schools may need to change their approach to the non-conference slate. Yes, beating a Power 6 school or even the likes of Gonzaga would be HUGE. No denying that. But, perhaps winning the games teams should win or beating the teams on a similar level mean even more when it comes to garnering respect.

Some teams have released their schedules while others continue to work on finalizing contracts. What we do know is there are some high-profile buy games for WAC schools. Dixie State and Tarleton State both play at Gonzaga. Seattle will play at UCLA and at Washington. UTRGV plays at Texas to open the season. California Baptist is at USC for its season-opener and at Arizona a few weeks later. Utah Valley plays at Stanford in its season-opener and at BYU three days later. Tarleton State also plays at Texas A&M and at Kansas.

Let’s be honest, if a WAC schools wins any of those buy games, it would be a massive upset. There is no denying that as WAC schools will be underdogs in every single one of these contests. It’s the other set of games in the non-conference slate that WAC schools need to win. New Mexico State sweeping its season series with both New Mexico and UTEP is crucial. California Baptist beating UC Davis. Dixie State beating in-state foes Southern Utah and Weber State. UTRGV beating the likes of Texas A&M Corpus Christi and other mid-major Texas schools.

Everyone loves an upset and perhaps some will come. But, the expectation should be for teams to compete and get better. This helps when playing teams on the same level where WAC schools are more likely to win games. Beat teams from other mid-major or low-major conferences and watch KenPom show some respect. Sitting in the 17-18 range in the KenPom rankings among conferences is a good place to be. The WAC becomes more noticeable as respect is earned.

But, like the Def Leppard song represented in the title, the WAC has a “Long, LONG Way to Go.”