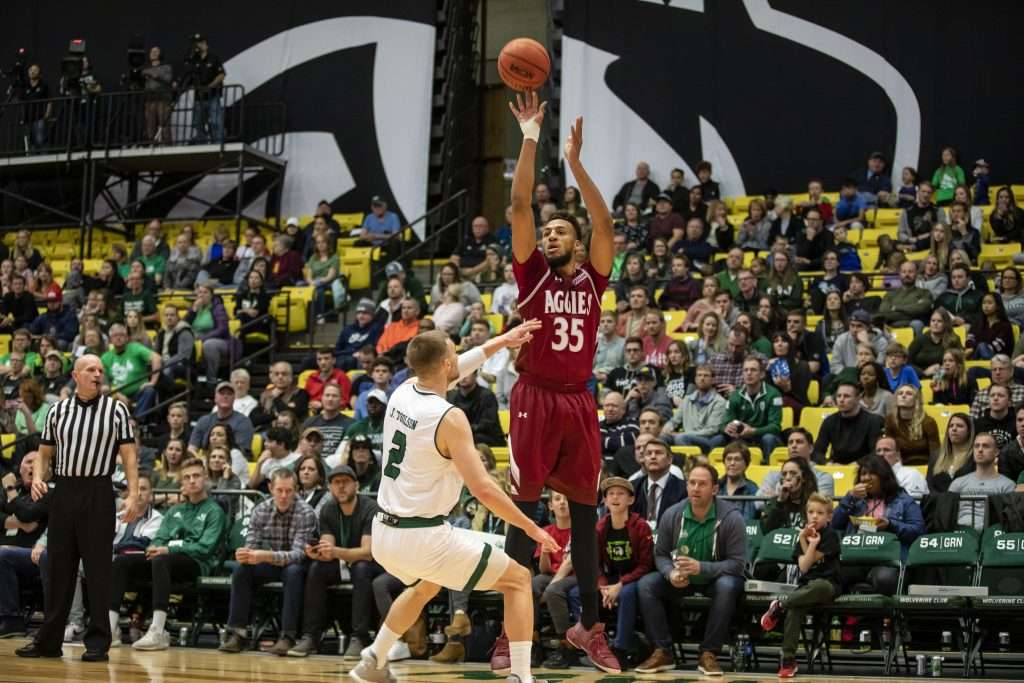 Johnny McCants and the New Mexico State Aggies reminded everyone that they are still ‘Kings of the WAC’ on Sunday afternoon. McCants had a team-high 18 points as the Aggies beat SEC foe Mississippi State, 58-52, in Jackson, Miss.

“I give (credit) all to my teammates,” McCants said. “They try to keep me in the gym every day before and after practice. They try to get me to work hard every day, and today I just felt a little bit different.”

Evan Gilyard, who became eligible prior to Tuesday night’s game against Arkansas-Pine Bluff, is the only other Aggie to score in double figures with 14 points. Trevelin Queen had six points and 10 rebounds. In fact, seven of 10 Aggies scored on Sunday afternoon.

At a time when the WAC has struggled for a signature win, Sunday was necessary. And for a team struggling to finish games and become consistent, it was just what head coach Chris Jans was looking for. The Aggies came into Sunday at 7-6. And oveer the last seven games were 4-3. One night a win. The next night a loss. And so it went until the third week of December. And perhaps Santa gave Jans and the Aggies an early Christmas present. In fact, two early Christmas presents. UTEP transfer Evan Gilyard was cleared to begin playing for the Aggies on Tuesday and senior floor leader A.J. Harris returned from a thumb injury to play Sunday.

And what did the Aggies get? A blowout win on Tuesday and then a statement win on Sunday led by McCants. Mississippi State came in with a KenPom ranking of 54. So, the Aggies were underdogs against the Bulldogs in their own backyard.

But, all New Mexico State did was jump out to a double digit lead early in the second half. And then held on for dear life to finish the game and pick up the signature win that Jans and the Aggies have been seeking all season long.

“For us to win the game, we knew it needed to be a grind it out, lower possession game, and that’s kind of the way they play as well,” Jans said. “So we thought that would fit for us to have a chance to win.”

It was a tale of two halves in Jackson, Miss. on Sunday. The Aggies shot just 25 percent from the field and were 3-12 from beyond the 3-point line. In fact, New Mexico State had more turnovers (8) than it did made shots (7).

Oh how quickly things change. Whatever Jans said to his team at halftime was heard loud and clear. McCants scored seven of the first nine New Mexico State points of the second half as part of a 9-0 run that pushed the lead to 32-21. McCants hit another 3-pointer that made it a 12-point game. Gilyard hit a 3-pointer with 12:20 remaining that made it 43-31.

From there it was a struggle as Mississippi State didn’t go quietly into the night. Reggie Perry gave Mississippi State a 52-51 lead with 2:35 to play. But, McCants and Gilyard responded with back-to-back jumpers to make it 55-52 with 1:26 to play.

Perhaps two of the biggest plays were by Trevelin Queen and Jabari Rice late in the game. Queen got a steal with 18 second left that eventually led to C.J. Bobbitt hitting one-of-two free throws. On the following Bulldog possession, Jabari Rice got a steal and drew a foul, hitting both free throws in the process and calling ‘game’.

It was a statement win in a variety of ways. Now that the Aggies are finally getting healthy, the WAC better take notice. And, this week’s wins are looking like a similar team that won 30 games a season ago. Different players are making big plays at important times. Plus, the Aggies showed that they can close out a game in which they let a big lead dwindle in the second half. And it is the first time since Nov. 18, 1994 that New Mexico State has beat a team from the SEC. So, 25 years in the making.

New Mexico State gets one last tune up before WAC play begins when the Aggies host Northern New Mexico on Dec. 29.

And it better be a tune up as the Aggies prepare to potentially get a bit of revenge from their only conference loss a season ago. Once again, similar to the 2018-19 season, New Mexico State opens WAC play at California Baptist. Aggie fans remember it well as the Lancers beat the Aggies, 82-76, in the Lancers’ first-ever WAC game.

A collision course is on par for Saturday, January 4 in the CBU Events Center. And it looks like it is going to be a pretty fun game to watch.