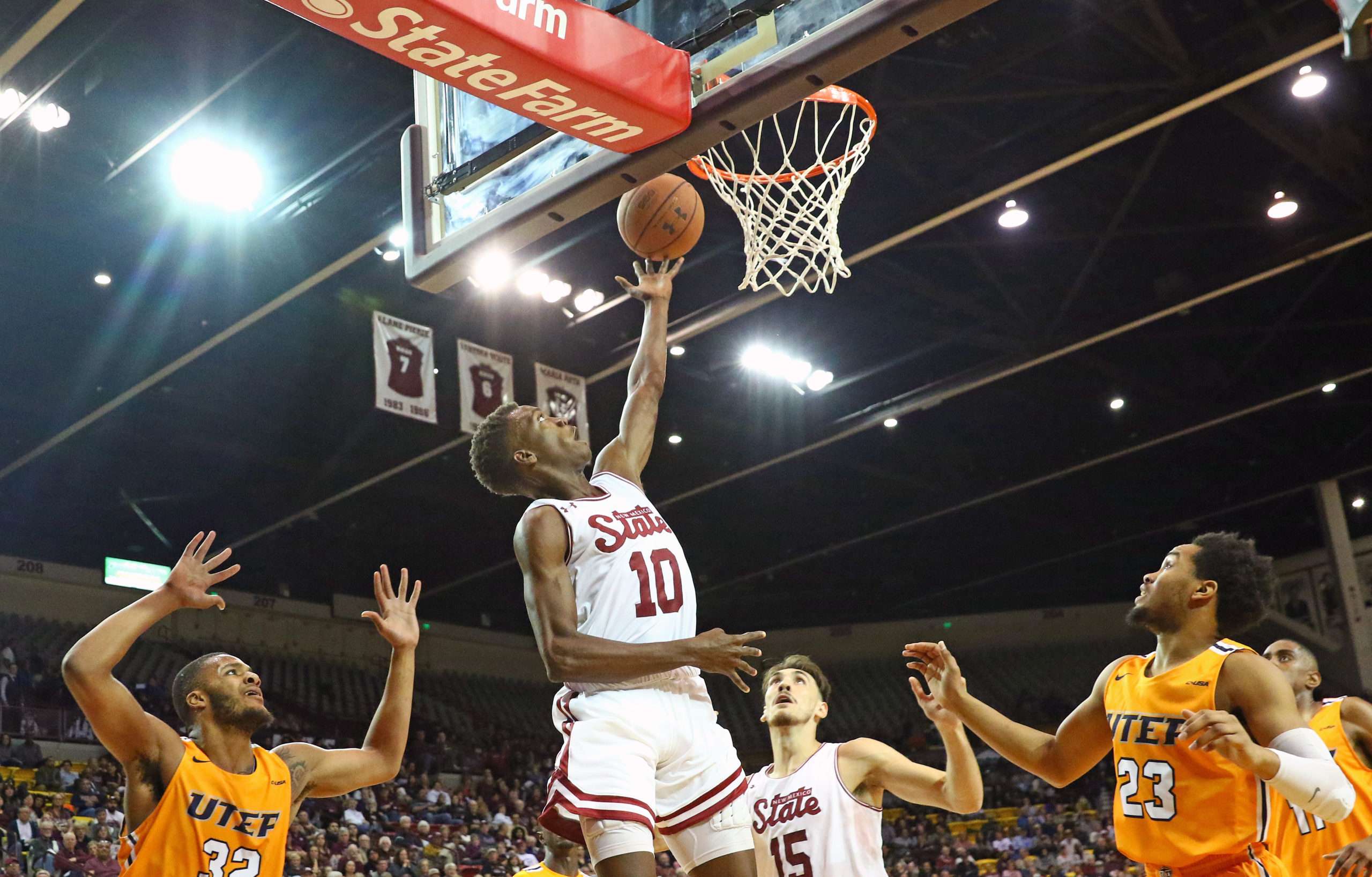 WAC basketball media days are upon us.  It is a new format as interviews will be done via Zoom meetings and streamed on Facebook Live. With it comes preseason accolades and polls put forth by coaches and the media. So, for the second straight year, WAC Hoops Digest has put together its preseason awards and preseason poll that it submitted to the WAC.

The redshirt junior guard took a huge step up in 2019-20. Rice was a first team All-WAC selection after having career-highs in points, rebounds and every other statistical category you can think of. Rice led the Aggies in total points (384), free throws made (86) and was second on the team in scoring (12.8 ppg) and three-pointers made (50). Along the way, Rice hit a game-winning shot against Utah Valley on Feb. 15 that capped off a career-high 29-point night. Rice started in 19 games in 2019-20 and is expected to be a mainstay in the starting rotation for head coach Chris Jans in 2020-21.

This is a copy-and-paste type of situation. Year after year, everyone thinks the Aggies are losing a ton of talent. And sure, in 2019-20, they did lost a lot of talent. Trevelin Queen, Terrell Brown, A.J. Harris, Ivan Aurrecoechea and Shunn Buchanan are all gone. But, looking at the 2020-21 New Mexico State roster, one can’t help but realize this team should be just as dominant as in years past. Clayton Henry returns from injury.

Johnny McCants is perhaps the best rebounder in the WAC and looking for his fourth WAC championship in as many years. Courtesy NMSU Athletics.

All-WAC selection Jabari Rice is back for his junior season. Perhaps the best rebounder in the conference in Johnny McCants returns for his senior season. Evan Gilyard returns to the point guard position. And if you didn’t know, New Mexico State is 19-0 with Gilyard as the starting point guard. Add in a healthy Wilfried Likayi along with transfers Donnie Tillman, Mayan Kiir, and former 4-star recruit Marcus Watson and it’s easy to see why New Mexico State should be top dog once again.

Oh, and the Aggies have a pretty darn good head coach. Chris Jans has won three straight WAC regular season titles, two conference tournament titles and would have had a third had COVID-19 hit back in March.

Don’t fault us for this selection as this is a tough one. UTRGV returns the WAC Defensive Player of the Year in Javon Levi and has 12 upperclassmen on its roster. Head coach Lew Hill added America East Defensive Player of the Year Jeff Otchere to his roster to bolster the interior. Marek Nelson and “Doc” Nelson (no relation) are eligible after sitting out the 2019-20 season due to transfer rules.

And this team is experienced. Eight players averaged over 15 minutes per game in 2019-20 and the Vaqueros won eight of their final 10 games. Sure, losing 1,000-point scorer Lesley Varner II and Mr. Highlight Reel Jordan Jackson is a blow. But, Lew Hill has pieces in place to be a very dangerous team in 2020-21.

The Dan Majerle-era is over in Phoenix. GCU is coming off an awful 13-17 2019-20 campaign. Among the bad storylines coming out of GCU is the fact that the Lopes were 8-8 at home in GCU Arena. That is something that can get you fired considering many believe GCU has the best home-court advantage in the nation. In steps Bryce Drew. The former Valparaiso and Vanderbilt head coach took a year off to be a color analyst for ESPN. Prior to his stint at ESPN, Drew was fired after three season at Vanderbilt in which the Commodores finished 0-19 in SEC competition.

So, there are question marks there. But, Drew inherits a rather talented lineup. WAC Freshman of the Year Jovan Blacksher Jr. is back. All-WAC forward Alessandro Lever is back. And Mr. Athleticism Oscar Frayer returns after sitting out the 2019-20 season due to academic issues. Drew also added 7-footer Asbjørn Midtgaard from Wichita State along with Oregon State transfer Sean Miller-Moore to an already solid Lopes rotation. It remains to be seen how everyone will gel but there are pieces in place.

Perhaps the Wolverines are a little high on this list considering all the new faces. But, there are a lot of teams with a bunch of new faces in 2020-21. The difference for Utah Valley is the depth that second-year head coach Mark Madsen has on his roster. The Wolverines are two-deep at nearly every position and have guys such as Trey Woodbury and Evan Cole who can play multiple positions. Madsen used the transfer portal to his advantage during the offseason.

Cole is the prized possession as he is a graduate transfer from Georgia Tech. But, Colby Leifson (BYU), Blaze Nield (BYU), Tim Fuller (Weber State), and Jordan Brinson (UAB) all join the mix. Add in junior college transfers Trey Farrer, Asa McCord, Jaden McClanahan, and Le’Tre Darthard and there is depth on the Utah Valley roster. One name to keep in mind as the season rolls along is Fardaqs Aimaq. Madsen spoke highly of the 6’11 big man who transferred in from Mercer prior to the 2019-20 season and sat out due to transfer rules.

Seattle U head coach Jim Hayford is an optimist. Seriously. He even mentioned it in a recent podcast episode. And he has to be in 2020-21 for good measure. Seattle lost two 1,000-point scorers in Morgan Means and Terrell Brown. That is tough to replace. But, there is some room for optimism with who Hayford has brought in. Grad transfers Daron Henson and Jared Pearre will take the floor for the Redhawks in 2020-21. JUCO All-American Angelo Stuart has the tools to fill the void left by Brown. And a trio of City College of San Francisco players know how to win and bring that mentality to the Pacific Northwest.

Nate Robinson, Darrion Trammell and Emeka Udenyi led the Rams to a 30-0 record on a team that averaged 100-plus points per game. Hayford really likes his roster and feels like his team is built to play his style of basketball. Riley Grigsby and Aaron Nettles are the top returners for Hayford who says the duo have done everything right since stepping foot on campus.

WAC Player of the Year – gone. WAC Newcomer of the Year – gone. All-WAC defensive team selection – gone. Top six scorers – gone. Okay, you get the picture. And here is a disclaimer, California Baptist head coach Rick Croy knows how to win and thus will probably show everyone this ranking is too low. But when you lose SO much from a 21-win season, it’s hard to put the Lancers any higher. Ty Rowell returns from injury and is expected to be the floor general. Add in transfers Russell Barlow (TCU), Gorjok Gak (Florida) and Elijah Thomas (Saint Mary’s) and there are some pieces in place.

If you think about it, WAC Player of the Year Milan Acquaah was a Division I transfer and look how he turned out at CBU. COVID-19 has given us some crazy times. And, now that CBU is eligible for the WAC tournament after a vote by the WAC Board of Directors, the Lancers have a lot to play for.

When a head coach tells you that his two big men are dealing with injuries prior to the season starting, that doesn’t give one a lot of confidence. Jon Judkins on a recent podcast episode mentioned that JUCO transfer Mikey Frazier and big man Hunter Schofield are both dealing with injuries.

Dason Youngblood is the team leader for Dixie State as the Trailblazers get set for their first season at the NCAA Division I level. Courtesy Dixie State Athletics.

Schofield is a huge part of Dixie State’s success as it begins its first year at the NCAA Division I level. Schofield earned All-RMAC honors after averaging 16.4 points per game while shooting 54 percent from the floor. The 6-8 senior from Spanish Fork set the Dixie State single-season scoring record with 491 points in 2019-20. Frazier is a 6’11 redshirt sophomore who averaged 14.2 points and 5.3 rebounds per game at Garden City Community College in 2019-20. Judkins needs his two big men to be healthy.

Starting point guard Frank Staine returns. Staine started 29 of 30 games for Judkins as a true freshman in 2019-20. Also returning is team leader Dason Youngblood who averaged 10.1 points and 4.1 rebounds per game in 2019-20. If you want to know how confident Judkins is in the Trailblazers’ first season at the Division I level, look no further than their non-conference schedule. Games against in-state foes Weber State, Utah State and Southern Utah and a Dec. 29 trip to Spokane to take on top-ranked Gonzaga in The Kennel.

Billy Gillispie is back. Okay, so he has been coaching at Ranger College the last few years. But, the Tarleton State administration is giving him another shot at the Division I level. Gillispie takes over for head coach Chris Reisman who stepped into an Assistant Athletic Director position at Tarleton. The Texans are coming off an 18-12 campaign in the Lone Star Conference. Now, the jump to Division I comes and there are some question marks. Only three players return for the Texans. Clashon Gaffney, Isaiah Range and Javontae Hopkins. So, will chemistry be an issue? New coach, new team. Perhaps.

Gillispie brought over some of his former players at Ranger College. Tre Gipson and Shakur Daniel both played for Gillispie in 2019-20. Jonathan Jackson Jr. also played two seasons for Gillispie at Ranger before transferring to Prairie View A&M for his junior season. Former LSU guard Caleb Starks is in Stephenville now. And Texas All-State guards Caleb Golden and Shamir Bogues will don a Texan jersey. Gaffney and Jackson Jr. are the lone seniors on Gillispie’s roster. So, there may be growing pains. But, Billy Gillispie is a winner and brings that mentality to the newest member of the WAC.

Xavier Johnson returns for head coach Lance Irvin and the Cougars. Johnson averaged 15.4 points and 2.7 rebounds per game for the Cougars in 2019-20. Andrew Lewis is back from injury and has potential to have a breakout season. Jordan Polynice comes over from East Los Angeles College to join former teammate Solomon Hunt who averaged 6.0 points and 4.4 rebounds for the Cougars a season ago.

It will be tough sledding again for Chicago State who was the first WAC team to cancel any games in 2019-20 due to COVID-19. The last time Chicago State won a conference game was March 3, 2018 in a 96-82 win over Kansas City to close out the regular season.